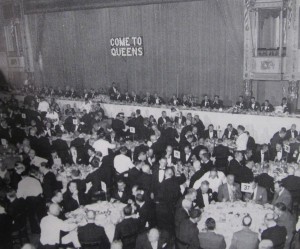 Annual Dinner of the Queens Chamber of Commerce at the Hotel Commodore.

The Queens Chamber of Commerce Building Awards program was first organized in 1926. The awards served the purpose of promoting development in Queens at a time when the borough was experiencing a massive influx of new population. This was partially driven by advances in transportation services including the Long Island Railroad, Queensborough Bridge, and New York City Subway system, which all connected Queens in the first two decades after the turn of the century. Census records show that the population of the borough more than doubled between 1920 and 1930, so when the awards program began there was a large quantity of new buildings to be considered.

Sixty-five entries were received for the first year and six awards were presented for buildings constructed from 1920-25 while a separate six were awarded for those built in 1926. The buildings were all featured in the Chamber’s monthly publication, Queensborough Magazine, started in 1915.  Early records are somewhat incomplete and the 1936 Awards Program mentions that the Building Awards were suspended for several years in the early 1930s for lack of building in the borough due to the Depression. 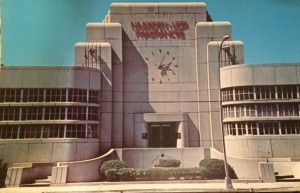 In 1936, five buildings were honored, but listed as representing the years from 1932-1935. One of the 1936 winners was the Knickerbocker Laundry Company, which was awarded in the industrial class for its massive moderne complex in Long Island City (since largely altered). The other winners, a brick apartment building, a theater and two picturesque residences, were less of a departure from what had previously been built in the borough. But here we see one of the first examples of a new style of architecture being recognized and appreciated by the local community.

The next year three buildings were honored. While not as radical as the Knickerbocker Laundry, increasing hints of new design elements can be seen in the flat decoration and vertical lines of Henry McGill’s convent building of the Blessed Sacrament in Jackson Heights and in the rounded metal balconies and lack of ornament at the Dongan Terrace Apartment House in Elmhurst. McGill would be honored again shortly after the war for the new church building in the Blessed Sacrament complex. The third honoree was an anachronistic Old World-style set of shops called the Tobias Feake Huis. 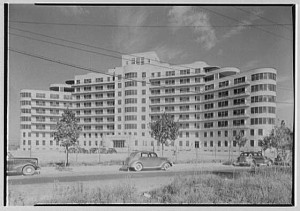 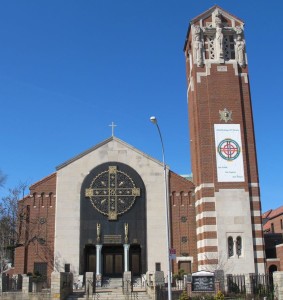 In 1948, the program reemerged with architect Simeon Heller as the chair. Heller would go on to play a prominent role in the Awards program, acting as jury chair from 1948 to 1952 and serving as a juror up to his death in 1969. Jurors were almost exclusively architects and property developers. Other long serving jurors during the 1950s and 60s include architects Raymond Irrera, Guerino Salerni, and Franz Meier, as well as developer Alfred N. Warwick, who served as chairperson before the war and on the jury for many years after. Several of the architects who served as jurors also received a significant amount of awards, such as Heller (14), Irrera (8), and John O’Malley (9).  But other non-affiliated architects also received several awards over the years such as the prolific apartment-building designer Philip Birnbaum (10), Catholic Church architect William Boegel (9), and jack-of-all-trades A. H. Salkowitz (8). 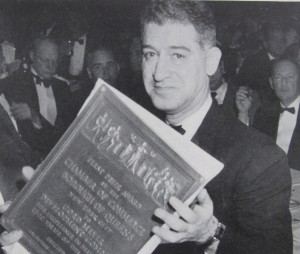 In the 1960s as construction boomed in Queens, more awards were presented and dozens of honorable mentions were handed out as well. Winners received a large bronze plaque, which can still be seen on and in dozens of buildings today. A paper certificate was given to the honorable mentions. At the annual dinner, booklets with images of all the award winners were distributed to the attendees. In addition to the program section of Queensborough Magazine, many of the best images of the buildings are featured in ads taken out by building owners and contractors. As with many award programs, the building awards served multiple purposes,  promoting excellence in design and construction but also providing the Chamber of Commerce with a trusted revenue source and a natural constituency of business owners, developers, architects, and civic leaders.

Today the Building Awards program continues to honor new construction and architecture in the borough.

Sources: All information on the Building Awards program adapted from issues of Queensborough Magazine 1926-2014.